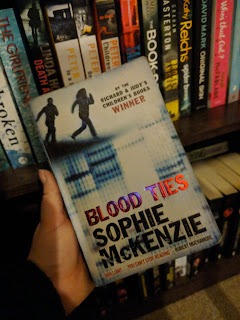 After finishing Girl, Missing  I went to my bookshelf and was surprised to find another book by Sophie McKenzie so I thought I'd give it a go. (I pick up second hand books from the local bookshop and often simply go by the blurb I rarely even look at the authors name!)

This one, Blood Ties, appeared to be aimed at adults rather than younger readers. It was longer and more in-depth characters.

Again this book was in first person alternating between the two main characters (Theo & Rachel) This style of writing I felt suited the story well. I was captured from the beginning and keen to keep reading.

I really felt like I was starting to like the two main characters too, so I will be looking to see if there are any follow up books to see where life takes them. (Update: there is a sequel for me to try and get my hands on so hopefully these two characters will be in it!)

An explosive thriller series featuring two teenagers, Theo and Rachel, who uncover a human cloning project. With chapters alternately narrated by both characters, Blood Ties and sequel Blood Ransom follow their quest to uncover the truth as they find themselves in increasing danger among criminals intent on causing them harm"
Information from https://www.sophiemckenziebooks.com/blood-ties-series