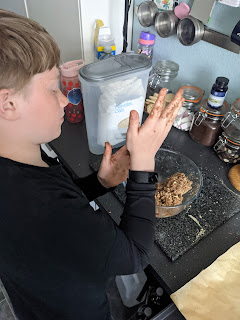 My eldest son will be turning 12 this year and I'm starting to worry I haven't taught him enough in terms of looking after himself and making his own food. I spoke with some others who have children the same age and I'm pleased it isn't just me who feels this way.
My son can make a sandwich, a cup of tea and other basics but I really would like him to learn more so that he can feel more confident in the kitchen so this year I plan to try and encourage him to bake and cook with me.
When i asked him what he would like to make this week he said he'd seen some recipies for protein balls online and wanted to have a go at these. It's something he made once when visiting the secondary school he'll soon be going to, they do cooking lessons there and they did a demonstration so he knew he could make them and that he would like to eat them.
We found a recipe to follow online, they were really simple and he was able to do most the steps on his own. I did help him with the blitzing of the oats.

Chocolate & Peanut Butter Protein Balls
What we used was: 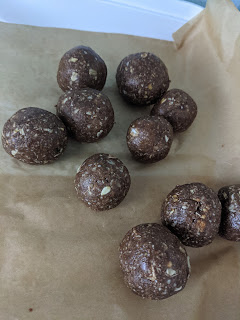 To make them it was pretty much a case of chucking it all in a bowl and mixing, there wasn't really much for him to do.
They don't look great, in fact I would say they look horrible but he was happy and he said they tasted good.