So another day of home schooling has come to an end and i have to say today i am exhausted. Not because of the kids, they were fantastic, again, but because my anxiety is at an all time high and i'm not dealing well with my emotions.

Last nights announcement from Boris put the UK on what many are calling a LOCKDOWN and i hope that everyone does what they can to follow the guidelines so this can all end soon.

Lesson 1 : Arts & Crafts
We chose to take this lesson outside. The boys wanted to make posters for the windows to make people smile when out for their daily walk. The boys used pens, pigment powders and water sprays. They had a great time.

Whilst the pictures were drying in the sun we had time for a game of catch. We managed to count to 69 catches before we dropped the ball & then after a few more attempts to beat that we kept dropping it (we blamed the sun in our eyes by that point!) 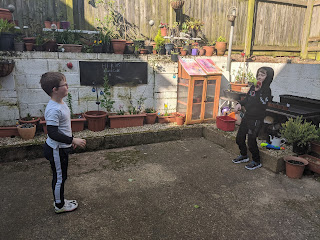 Lesson 2 : Math
Seriously, i hate math! I can do the basics no problem but fractions and decimal point systems bla bla bla i really could not understand half of the worksheet my year 4 son was asked to complete. He got really upset as he said he'd never learnt what the sheet was asking of him and yet i downloaded it from the advised site. In the end we just moved on and played math games online including TT Rockstars times tables games and other games from Topmarks. Through the day there were lots of math learning opportunities including measuring, counting out money etc so i wasn't too worried. 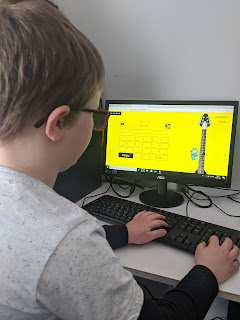 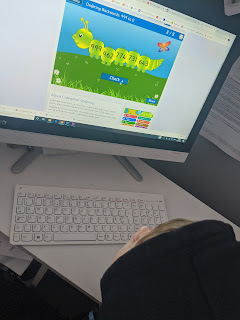 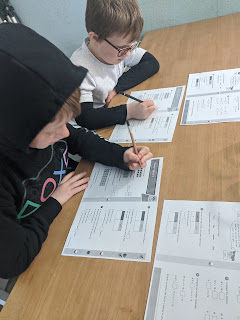 BREAK
During break the boys played ball games and bubbles in the garden. I told them i had a little work to catch up on when in all honesty i went and hid on the stairs crying. How awful is that, i wasted time with my boys to sit and cry! I got over emotional about some work related things and it just all got on top of me. I'm so anxious about everything at the moment and feel more lonely than ever. No adult company is starting to drag me down. I really need to make an effort later to facetime some family or friends and try and snap out of the way i'm feeling.

The boys thankfully didn't seem too bothered, they did walk in on me crying but i just said i didn't feel well which they accepted gave me a hug and got me out in the garden to play ball. 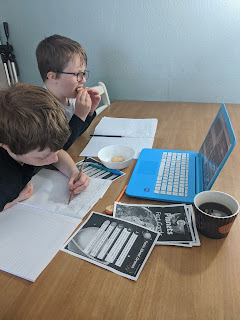 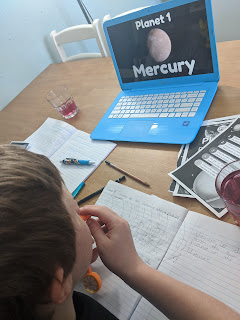 Lesson 4 : Cooking
Unfortunately my eldest son felt unwell by this lesson, he was flushed and said he had a headache. No CV19 symptoms so far, i personally think he was just feeling over tired. He went for a rest on the sofa so Finley and i got on with the cooking. Fin made banana cakes for us all. 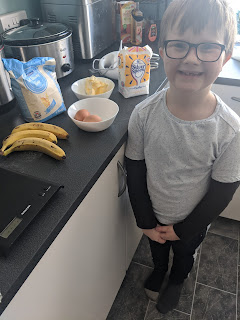 Fin read the instructions, found all the ingredients in the kitchen, weighed them out, mixed them and put the mixture in the oven. He had a great time! 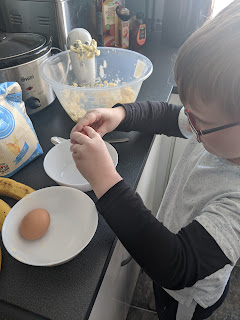 Whilst the cakes were in the oven we made lunch and enjoyed a film together at lunch time. Goosebumps i think it was called, they enjoyed it. I caught up with some house chores and work emails. After lunch the cakes were ready so we enjoyed them with a side of cream. Reu was feeling much better by this point so joined us in eating the yummy banana cake! 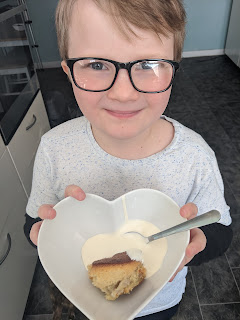 Lesson 5 : History
Today we discussed Ancient Egypt, we watched a YouTube video about hieroglyphs and worked together on decoding a worksheet. The boys really enjoyed this activity. Once complete we decided to each design our own hieroglyphs and then write messages to each other using them which we took it in turns to de-code. It was a fantastic lesson we all laughed and had fun. 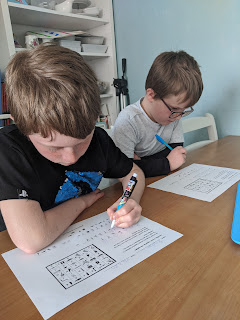 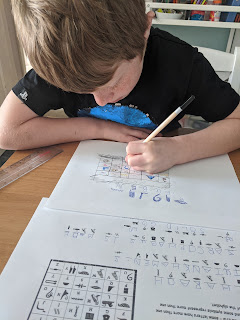 Before the end of our 'home school' day we took the time to write another 'review of the day' a little like a diary entry. I ask the boys to do this so i can get an understanding of how they felt the day went, to find out what they enjoyed and didn't enjoy to let them write about things in their own words. It is also good writing practice. I'm pleased to report that they had another good day! 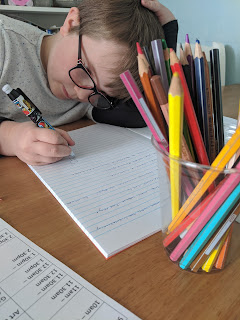 So as i write this the boys are on free time, they are around the house, somewhere, playing games and talking to friends on their phone. I'm so thankful that the house although only a maisonette, is big enough for them to find their own space where each of us can take time for ourselves even in this new lockdown situation.

My mind has been on overdrive all day. Worrying about things out of my control. I wish there was more i could do to help everyone in need but i'm just not strong enough to do anything more than i am right now. I am barely holding myself together enough to home school the boys each day. This probably makes me a terrible person and i expect you will all judge me even more than before now but i want to be honest here on my blog. I want those reading to know that if they are feeling a similar way to me that it is OK, there are others feeling the same.
As a parent all i can do right now is follow the government guidelines and be as strong as i can for my boys.
As a shop owner all i can do is close up, pray and hope that i will be able to survive and come back to it one day without losing my business and my home!