The Possession of Mr Cave by Matt Haig : Book Review 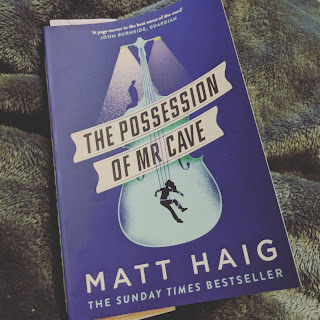 The Possession of Mr Cave
by Matt Haig

BLURB
"FROM THE NUMBER ONE SUNDAY TIMES BESTSELLING AUTHOR

Terence Cave, owner of Cave Antiques, has already experienced the tragedies of his mother's suicide and his wife's murder when his teenage son, Reuben, is killed in a grotesque accident. His remaining child, Bryony, has always been the family's golden girl and Terence comes to realise that his one duty in life is to protect her from the world's malign forces, whatever that may take.
But as he starts to follow his grieving daughter's movements and enforce a draconian set of rules, his love for Bryony becomes a possessive force that leads to destruction."

REVIEW
This is not the sort of book i would choose usually but it was available at such a good price in a set of 3 by the same author that i thought i would give it a go. I always like to try new authors and material when i'm feeling in the mood.

The style of writing is very different to anything i've read before, it is written in what I believe is called 'second person' as the character of Terrance, a father writing to his daughter Bryony.

The story I felt kind of dragged along. The character of Terrace I found to be rather frustrating with all the literary quotes and over talking. I felt like the story was padded with so much reference to old literature classics it lost its flow.

The overall story I thought was good, though without the padding it would have been considered I expect a short story.

I would give this book 3.5 out of 5 stars. It wasn't to my taste but I can appreciate the story and that many will likely enjoy this style.

A note on this print edition too,
There are lots of gaps and spaces in the print and there are no chapters as such, just page breaks. I found this a little odd this obviously relates only to the print edition I ordered (2018 Canongate Books LTD)
Though I expect the reason for no chapters is because it's written as if a letter.

If you want to find out more about this book or purchase it please use the links below, it won't cost more but it will help support my blog:

Available here as part of a set of 3 by Matt Haig *currently on SALE amazing price!