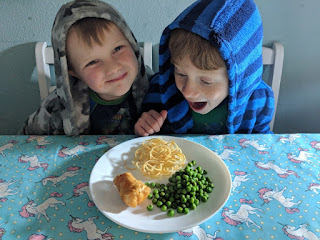 We recently visited The Wet Fish Shop in Lyme Regis and got Brill, a flat fish that we hadn't tried before. As Jon is a fantastic cook i set him straight to work in the kitchen to come up with some tasty ideas to feed us and to feed my son's Reuben (8) and Finley (6). One of the first ideas he has was these fantastic tasty Brill Bites. (keep checking back to the blog for the other ideas they will be up on here soon)

To create both meals we used our little fryer, it is brilliant for small meals. To see which one we use click here.

First he set the fryer to heat. Then he made a batter by mixing together the plain flour, milk, water, baking powder and a pinch of salt. Next he sliced the Brill to size and then coated it in batter. He carefully placed each piece into the fryer and watched until they went golden brown, obviously as this was the first time he made them it was a judgement call on when they were done but we found they only took a few minutes and they were perfect once the batter on the outside was golden brown.

To create the potato slices he simply thinly sliced the potatoes and fried them. The peas were put on to boil whilst he was making the brill bites. 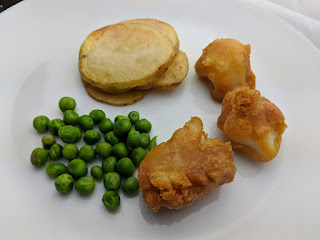 Above was the taster plate we gave one each to the boys as we were not sure what they would make of it as they'd never tried is before but we were pleased to find out they loved it so more had to be made! Jon & i tried some too, they tasted fantastic! Super quick to make too. 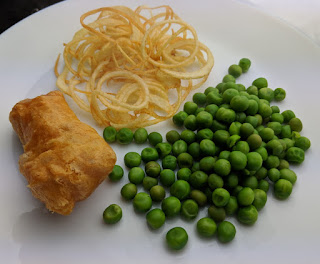 The best bit for them was getting to see where the fish came from, to see the photo of Dan the Fishmonger fillet the fish and then watch Jon make a yummy tea. They've even asked to go visit The Wet Fish Shop with me soon and choose another fish to try. Such a brilliant way of getting kids to try different foods.

Brill supplied by The Wet Fish Shop in Lyme Regis