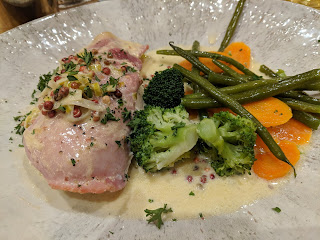 This will probably be the only 'restaurant review' you will ever see on my blog given that I eat out maybe once or twice a year! You probably think I'm joking, but I'm not! Unfortunately being a 'single mum' (I put it like that because though Jon has been in my life a few years now I still live alone with my sons and don't see him much!) on a budget it means I don't get out much! Last week though Jon took me out for a 'date night' we haven't done this in over a year, we really didn't know what to expect. 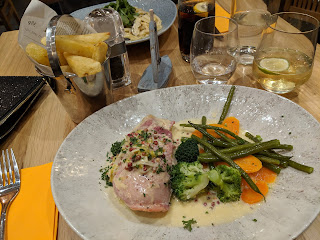 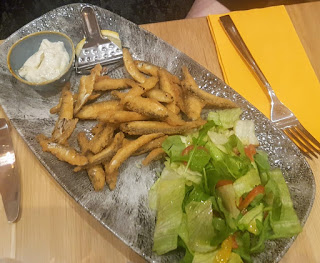 We chose a new local restaurant called 'Le Pisani' it looked fantastic, it was only recently built and the interior decoration is smart and modern. The atmosphere was lovely, staff were polite and the music wasn't too loud. It was noisy though, so many people and so much conversation, I just wasn't used to eating around so many people I think. 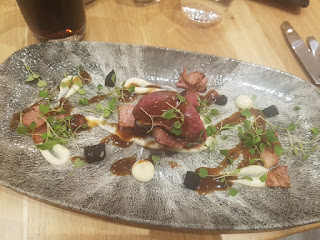 The food arrived promptly, there wasn't too much of a wait. We had a starter & main each. I chose a fish starter & chicken main. They were both tasty, well seasoned  (there is a pepper mill with table salt on the top in the middle of the table, it's a two in one fancy looking gadget so don't get confused like we did thinking there was no salt available, haha) good size portions and the food looked and tasted fresh. I was really impressed with their 'chips' lovely big chunky potatoes, more like wedges than chips but very nice.  The vegetables were perfectly cooked & the sauce went really well with it all.
Jon had a wood pigeon starter & pasta main, he enjoyed both. 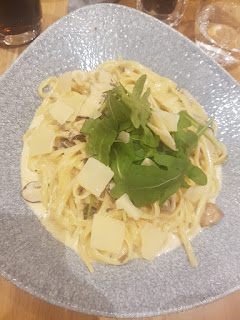 Overall it was a lovely meal out, I was very impressed with the place. It was expensive to be honest, but I think that might just be because I'm not used to restaurant prices so wouldn't really know what to expect. In total it was £48.80
for both of us to have starters, mains, cola & appletiser (we rarely drink alcohol)

I'll happily recommend the place to friends, family & customers who pop into my shop asking for somewhere nice to go out for a meal.

I would love to say we'll go back but if I'm honest I wouldn't be able to justify the cost when I usually feed me & the boys for a week for £55 so I think I will stick to home cooking for now - at least for 5-6 months, then maybe we'll go back again!