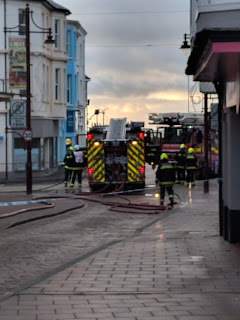 Out for an morning walk with the dogs and came across a sight I wasn't expecting.

Apparently the fire started just before 8am this morning and fire crews were quickly on scene. 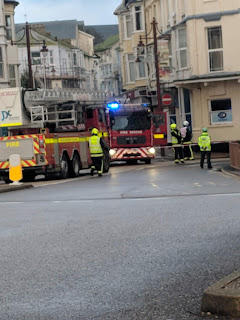 From what I could see there were still at least 4 engines on site. There was a big team of services active. Roads in the area have been shut including Harbour Road. 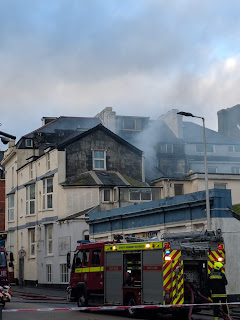 It looks like it started in flats above the Boots / Pauls Bakery area but I cannot be sure. Fire crews are there now assessing the damage and investigating.

"Devon and Somerset Fire and Rescue Service were called to reports of a building fire at the above location.  One fire appliance from Seaton, one from Colyton and one from Axminster were initially mobilised to this incident."
"Upon arrival crews requested a further two appliances which were mobilised from Lyme Regis and Sidmouth along with the Aerial Ladder Platform from Exeter Danes Castle.   Crews confirmed fire within a building consisting of five floors, floors 1-4 used as residential properties consisting of 15 flats.  Crews set to work to extinguish the fire using six breathing apparatus, three hose reel jets and one covering jet.

At 08:52  crews requested an additional two fire appliances which were mobilised from Honiton and Ottery St Mary.

At 09:28 Crews made pumps ten additional fire appliances from Beaminster, Charmouth and Sidmouth along with special appliances were mobilised to the incident.

At 10:11 Crews continue to extinguish the fire however access for crews to fight the fire is hampered by collapsed floor, fire is believed to have spread through floor voids crews working to pull down ceilings to detect and extinguish the fire spread.  The hydraulic platform is also in operation surveying roof for hotspots.  Casualties being treated by Ambulance personnel who are also on scene.

At 10:59  All persons are now accounted for, steady progress is being made cutting away and damping down.

At 11:47  The incident is being scaled down, a multi agency meeting has taken place and local authority are co-ordinating accommodation for the affected residents.  A structural engineer has been requested to attend.  Crews still damping down hot spots within building. 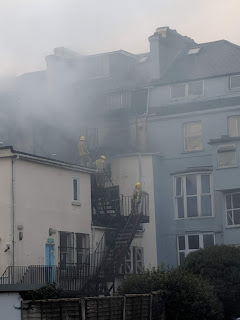 We have been told that noone was seriously hurt but that someone is being treated for smoke inhalation. We await confirmation on this.

Sending my best wishes to all involved and a massive thanks to the services who are still working hard now.

If anyone knows people affected and need somewhere to be today I live on Queen Street and I am happy to take people in or help in anyway I can.